Kumar Ale is the Managing Director and a founder member of Shilpee Theatre since 2006. By profession, he is a photographer.He started photography when he was 13. He has seen black and white era transforming to colour pictures, reel development and colour lab into digital photography. Till 2050 photography was a business for him as he was doing professional photography in his colour lab.After that he started his freelancing career and he started to click art and literature based photography because he thought artists, poets, writers, are the property of the nation. Their photo should be clicked and archived with equal importance. During his closeness towards art and literature, he started clicking photos of plays and theatre. From the very beginning of his theatre photography he had a deep sense of lights used in play so he started clicking pictures without using flash light. Later it became the culture. He became close to theatre because he sees beauty in various lights used in the theatre. Light is a crucial element in photography and so in theatre thats why he finds interconnection between theatre and photography.

The Founder of Shilpee Theatre Group and its current Artistic Director, Ghimire Yubaraj is also a columnist, a playwright and an author. He is a graduate of Commedia Theatre School, Copenhagen, Denmark where he undertook a two-year intensive theatre course. He specializes in physical theatre and has practiced commedia dellerte, storytelling and ‘theatre of the oppressed’ method extensively.

Yubaraj believes that ‘activism through art’ can have a deep impact on our society and help transform the society.

Mr. Mohan Prakash is working as the publication head and the accountant from December 2018. He has persuaded his master’s degree in Geography and B.A – B.Ed in Nepali Literature. He has experience working as a teacher before joining Shilpee Theatre. He is also an actor who has worked in a few plays at Shilpee. He likes to travel and read the books in his free time. He has written many critical articles about theatre.

Ms. Pabitra Khadka is a resident artist at Shilpee Theatre. She is also a dancer and a trainer. She has a bachelor’s degree in Classical Dance. She has also taken many formal and informal trainings on storytelling and acting. She joined Shilpee in 2015. Since then, she has performed in more than 15 plays, in a few movies, short movies and television shows.

Mrs. Bina Bhattarai joined Shilpee Theatre in August 2019 as the communication officer. She holds a masters degree in English Literature and has more than 3 years of experience in development sector. She poses sound communication skills that encompass progressive experience on coordinating and collaborating with a wide range of theatre lovers. She has interests in arts and literature. She loves to read in her free time. She is also a feminist who believes in equality.

Mr. Jhakendra BC joined Shilpee Theatre in 2015 as an artist. He has a bachelor’s degree in Business Studies. He is skilled in martial arts, dance and storytelling. He has performed in various plays, movies and has also directed 2 plays. His aim is to grow as a theatre person and create a theatre group.

Mrs. Bansri Pandey is an architect, an artist and a project manager. She has a masters degree in International Project Management from Germany, a diploma in freelance and feature writing from London School of Journalism and a bachelor’s degree in Architecture from India. She has performed as an artist in Shilpee Theatre’s plays. She is involved in assisting with communications and marketing at Shilpee Theatre since July 2019.

Sangita is a resident artist at Shilpee Theatre since 2015. She has a Bachelor degree in Nepali and Music. She has performed in several street plays and stage plays. She aims to be a successful artist and a writer in the future.

Jack is an artist at Shilpee Theatre since 2018. He is a student of BBS. He has performed in several plays and has worked in a few short movies. He aspires to be a writer, learn Nepali contemporary dance and be successful at acting.

Himal is an artist at Shilpee Theatre since 2018. He is a student of BBS. He has performed in several stage plays, a few forum theatre plays and a few short movies. He likes acting, writing, reading and traveling. 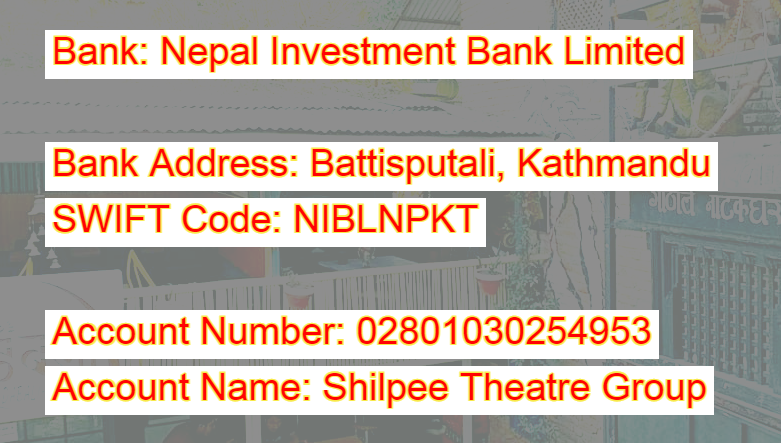